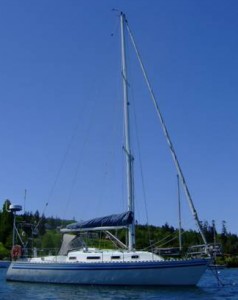 I got the boat! Helmut, the surveyor, and I drove to Port Townsend Friday morning. The survey turned up no surprises and everyone agreed the boat was sound and priced fairly. I completed the deal and the plan was for Helmut and I to sail back to Seattle that night. We bought drinks and food, loaded the boat, and left the dock around 4:30 pm. That was several hours later than we had hoped which meant working against the tidal currents and a longer trip. I had guessed about 10 hours but that turned out to be a severe underestimate.

The weather was beautiful: sunny, clear, and pleasant temperatures. There was some wind when we started but it died around 6:00 (typical for the region) and we motored. The passage was going well but progress was slow due to the currents. By 10:00 pm we had reached Point No Point and started to cut across the shipping lane. Half way across, the circumstances–not we–went south.

The engine stopped abruptly. We assumed we had run out of fuel and there was little choice but sail west again and then south to Kingston where we could anchor and take the dinghy in for diesel. But without wind sailing is hard and our position was dangerous. There is serious risk in the shipping lane from commercial vessels like container ships, cruise ships, and tugs towing large barges. We radioed Seattle traffic control and they notified ships to watch for us.

Eventually a very light breeze allowed us to sail west out of the shipping lane, but lacking a spinnaker it was impossible to head south to Kingston. It got later and later and still no more than a useless breeze. For hours we beat back and forth in the same stretch of water just south of Point No Point. We tried to start an hourly watch but neither of us could sleep. The sun rose and still no wind.

Around 8:00 am the wind picked up somewhat but we still could not make progress south. Eventually we decided to go for the nearest port the wind favored, Port Ludlow to the northwest. At 11:00 we had come within a mile or two when the wind left us adrift again. We appealed for help by radio and a 38 foot power boat heading in to Port Ludlow came to our aid. We rigged a side-by-side tow and Skipper Gary easily delivered us to the fuel dock. He was the first of several extraordinarily kind and generous people who helped us.

The fuel tank only took a few gallons and we realized something else was wrong. Helmut checked the filter and found more water than diesel. The fuel that came with the boat was fouled. Our second hero of the day was Bruce who drove us to his home (and the grocery store) and gave us a 2.5 gallon jerrycan. With no tools beyond a pocket knife and a borrowed crescent wrench, Helmut rigged an alternative fuel supply, bypassing the ruined filter.

We set out again almost exactly 24 hours after the original departure. Like the day before we sailed until the wind died at 5:30 and then motored. The goal was Kingston where we would re-fuel and then cut across the channel for the locks and Lake Union. As if the area itself were cursed, the engine stopped again just south of Point No Point. This time, though, the wind picked up and I sailed while Helmut worked on the improvised fuel system. He succeeded just as we were on the final tack towards Kingston. We reached the fuel dock at 8:00, too tired and spent to continue safely.

The third and fourth heros of the day were Kori and Ray at the Kingston marina. They stayed late to take care of us and got us into the only remaining unoccupied slip where we could stay the night without worries. Ray gave me his 5 gallon jerrycan and helped us get a few tools, parts, and supplies from stores in town. Helmut was able to put the modest assortment to good use improving on the first jury rig.

The final savior of the day was my wife, who offered to gather clothes, toiletries, and bedding and bring them to us via the Edmonds-Kingston ferry. I met her at the ferry terminal at 10:45 pm, relieved her of the armloads of bags, and watched her depart 15 minutes later on the returning ferry. After 40 hours without a wink, sleep came easily Saturday night.

Sunday was another beautiful day in the Puget Sound area. The shower and clean clothes felt great and we stumbled onto a delicious brunch at Kingston’s Oak Table Cafe. Helmut completed repairs and we set out early in the afternoon. The new jury rig worked flawlessly and we made good time across the shipping lane and south to Seattle. Through the Ballard Locks, under the bridges, and into the new moorage on Lake Union, we docked safely.