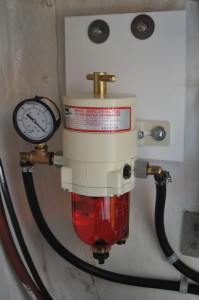 I learned about the perils of fouled fuel within several hours of acquiring Czardas. Prior to my purchase, the boat probably had not been used for months and possibly years. Diesel fuel doesn’t do well sitting that long. Moisture condenses in the tank and fungus grows, clogging fuel filters (or worse) and ultimately stopping the engine. That’s what happened while motoring the boat to Seattle last year (see The Odyssey).

Diesel engines are said to have a few simple but absolute requirements and clean fuel is right there at the top. Fuel and filters can be changed but there was also a systemic issue in the form of a 35 gallon fuel tank. This is a large tank–convenient when making a long passage such as sailing from South Africa to the United States. But it is over sized for weekend sailing and limited coastal cruising. If fuel is not consumed quickly enough then eventually it will become fouled.

Fixing the fuel system required bypassing the old tank and stepping down to a much smaller one where all the fuel could be consumed through regular usage within a few months. This was prototyped last July when Helmut jury rigged a five gallon Gerry can as a fuel tank. 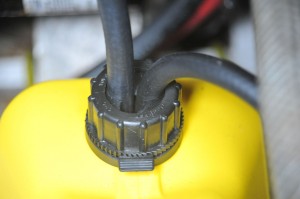 I secured a new Gerry can in the lazarette so that it would remain in place even in a knock down. It required three hoses: fuel out, fuel return, and vent. Using 3/16″ buna nitrile I cut a small gasket to fit inside the Gerry can screw cap. The gasket has three holes to accommodate 5/16″ fuel hoses. The 3/16″ gasket turned out to be a bit thick. 1/8″ or even smaller would have been better but I had the 3/16″ material on hand already for gasketing water tank access ports.

The old Racor spin-on filter body was not worth salvaging and I replaced it with a better quality model, the 500FG. Flow rate in my system is too low to benefit from the turbine action but it’s still a superior filter and replacement cartridges are much less expensive than the spin-ons. 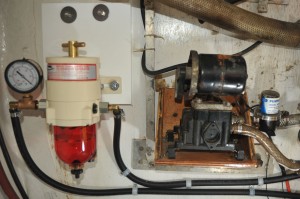 I mounted the Racor filter to an 8” x 9” panel of 1/2″ Marine Lumber and in turn mounted the panel to two existing bolt ends protruding through the bulkhead between lazarette and galley. Marine Lumber is a synthetic material that saves a lot of time: easier to cut and drill than plywood, requires no treatment (varnish/paint), and is durable. On the back side of the panel the nuts and bolts are covered with pieces of rubber cut from rubber stoppers to minimize vibration.

I replaced the filter cartridge in the secondary fuel filter as well. This was the only work needed on the engine itself other than bleeding once the new system was completed.

Finally came the plumbing. Fuel lines are routed against the bulkhead as far as possible and secured with 5/8″ P clips. My homemade gasket does a pretty good job securing the hoses into the Gerry can but to be certain I taped them with Gorilla Tape.

The Racor requires an adapter for each of its ports. They are NPS fittings with O rings. The other three fittings are bronze NPT: a couple right angles and a T that facilitates a vacuum gauge on the output side of the Racor. 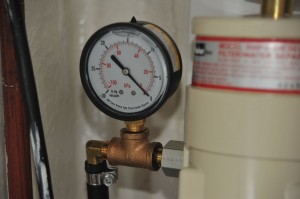 If the gauge ever rises off the zero mark the filter needs to be changed. NPT joints were sealed carefully using Permatex 2. The various 5/16″ fittings were too small to grip with a strap wrench so I tightened them using a couple locking pliers with strips of an old V belt in the jaws to prevent gouges.

On June 20th I turned the key for the first time in 11 months. The engine started in under five seconds–very gratifying after all the electrical changes and fuel system work. Obviously this is not a permanent solution but it will suffice for the season. Long term plans almost certainly involve replacing the 35 gallon tank with a smaller one, which also will impact a large water tank currently mounted atop the fuel tank.